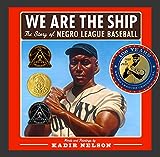 We are the ship : the story of Negro League baseball / words and paintings by Kadir Nelson ; foreword by Hank Aaron.

Using an "Everyman" player as his narrator, Kadir Nelson tells the story of Negro League baseball from its beginnings in the 1920s through the decline after Jackie Robinson crossed over to the majors in 1947. Illustrations from oil paintings by artist Kadir Nelson.