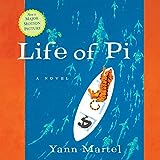 Originally issued as a book: Toronto : Alfred A. Knopf Canada, 2001.

After the tragic sinking of a cargo ship in the Pacific, one solitary lifeboat remains, carrying a hyena, a zebra, a female orangutan, a Bengal tiger, and a 16-year-old Indian boy named Pi.