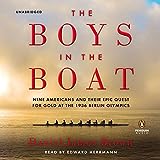 The boys in the boat : [nine Americans and their epic quest for gold at the 1936 Berlin Olympics] / Daniel James Brown.

This is the remarkable story of the University of Washington's 1936 eight-oar crew and their epic quest for an Olympic gold medal. The sons of loggers, shipyard workers, and farmers, the boys defeated elite rivals first from eastern and British universities and finally the German crew rowing for Adolf Hitler in the Olympic games in Berlin, 1936.